In McGilchrist’s new book, The Matter With Things: Our Brains, Our Delusions and the Unmaking of the World, he spends a considerable number of pages discussing the relation of mental illness and other pathologies of the brain to the hemispheric balance. Schizophrenia and autism share a chapter. He provides lots of evidence that the loss of reality and related symptoms in schizophrenic subjects is due to an imbalance of the hemispheres with th left strongly dominating the right. That makes sense as the affected person is operating largely out of the disconnected hemisphere, and had limited connection to the actual world.

Here is a short quote that captures much of what he writes:

A lot of things happen to the world in schizophrenia (and in autism): to the sense of the whole, of context, of the relation between mind and body; to the sense of connectedness to, and belonging in, the world; to one’s relatedness to other human beings; to the sense of animacy; to what one might call the sense of naturalness, spontaneity and vitality; and to the very existence of the self.158 Each of these aspects of experience is also compromised in right hemisphere damage; and problems with each of them are also recognisable, I believe, in the modern Western world, and have even become the focus of much of its literature and art in the last hundred years or so, as Louis Sass suggests (p. 487).

A little later, he cited some work by Eugéne Minkowski, a Polish psychiatrist who he said had made “the most comprehensive psychological account of schizophrenia ever written.” Minkowski used a dichotomy developed earlier by the philosopher, Henri Bergson, “between what we now know to be the left hemisphere’s take (which he [Bergson] called intellect) and the right hemisphere’s take (which he called intuition). Minkowski found that in schizophrenic subjects, “Bergson’s intuition becomes atrophied, and Bergson’s intellect becomes hypertrophied (exaggerated),” and showed the details in the figure below. 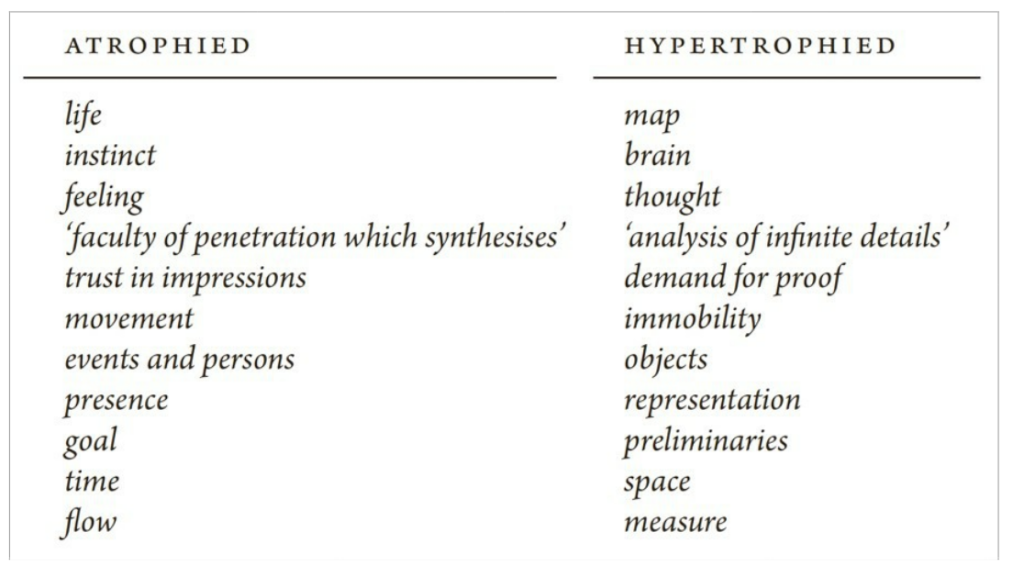 Interesting on its own merits, but the point I want to make is that McGilchrist stresses that the right hand column, the one corresponding to the pathology, also describes the character of modern cultures.

I believe, to varying degrees, this shift has become characteristic of the way we live now. In fact if you look at the list on the left, it characterises embodied vitality; on the right, it characterises the dead hand of mechanism, scientism and bureaucracy, under the shadow of which all our lives are now ‘lived’. The Swiss psychopathologist Roland Kuhn saw, at the core of psychosis, ‘an inauthentic materialisation, technicalisation and mechanisation of everything’. That suggests there is an imbalance verging on mental illness in our current society, since these are some of its most prominent characteristics (p. 489).

I have often use the metaphor of a collective brain to describe societal behaviors. My source for this analogy is the structuration model of societies of Anthony Giddens. Giddens argues that there is a dialectical relationship between normal social behaviors and the way individuals think and act. If viewed as a unitary organism, a society would have a brain with the same left/right balance as a typical member.  Societies reflect the prevalent balance in the brain, and, according to this comparison, our modern world shows all the traits of schizophrenia but. most critically, a disconnect from the rich, meaningful real world. More evidence that, change, if it is to come, must begin by shifting the hemispheric balance back to the right, so that human action may begin to take care of the world instead of seeing it only as a resource to satisfy the needs of the left-hemisphere.