For those who haven’t been following closely, I will repost the table containing the several behaviors associated with the right-hemisphere. I have rearranged the rows in the order in which I discuss them in this series of blog posts. 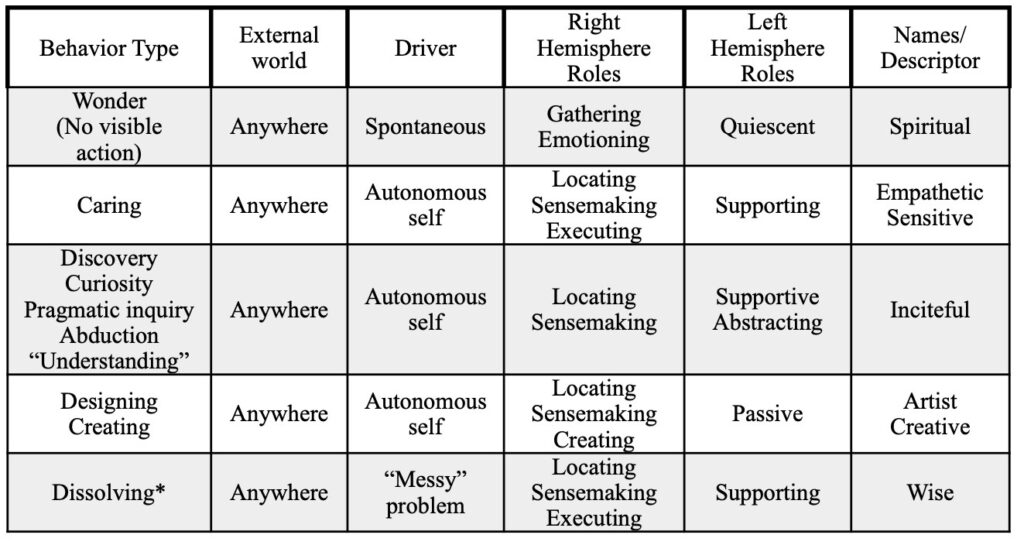 Caring is an especially important category because it has existential implications and is also partly constitutive of flourishing. Caring acts incorporate inputs from the contextual world presented to the right hemisphere. Empathy, sensing what is going on with another person and acting in accordance, guides much caring. But not all caring acts, such as stopping to pick up a piece of litter, require an empathetic connection. The actor is simply acting out of a sense of rightness or correctness. If asked why the act was made, the answer would be something like, It felt right or I cared. There is always a sense of “I,” an autonomous agent involved. Heidegger called these acts, authentic, to reflect that sense of owning the act.

I need to repeat again that this categorization, shown in the table(s) is very generalized and simplified relative to the actual way the brain works. I have reduced the process to a simple right–>left–>right sequence, when multiple iterations occur, as well as interactions with other non-cortical parts of the brain. But I find this simplification makes the different behaviors distinctive. Such distinctions are helpful, even necessary, in designing ways to modify the current distribution of behaviors in modern societies, in particular, restoring the right-hemisphere family to a level at which point flourishing once more becomes a possibility.

In all the right-behaviors, except for wonder, the first step in the sequence of cognitive processes that eventually lead to an action is what I have called locating, that is, making sense out of the whole of the sensory inputs bombarding the right hemisphere, picking out something that “needs” to be addressed. Wonder is uniquely different in that the brain does not recognize the scene as needing anything to be done, and simply takes it in, responding emotionally, producing feelings and bodily responses. I do not call such bodily responses actions, in the same sense that those involved with any other of the behaviors are.

For Heidegger and other existentialist philosophers, caring is the primal way humans “exist.” Because of this human existence is distinct from the way other objects appear in the world, that is, “are.”. His word for human being, dasein, is taken to meaning being-there or being-in-the-world. In the divided-brain-model, this fits precisely the way the right brain connects to the real world and creates a “betweenness.” Here is what McGilchrists writes.

Experience is forever in motion, ramifying and unpredictable. In order for us to know anything at all, that thing must have enduring properties. If all things flow, and one can never step into the same river twice – Heraclitus’s phrase is, I believe, a brilliant evocation of the core reality of the right hemisphere’s world – one will always be taken unawares by experience, since nothing being ever repeated, nothing can ever be known. We have to find a way of fixing it as it flies, stepping back from the immediacy of experience, stepping outside the flow. Hence the brain has to attend to the world in two completely different ways, and in so doing to bring two different worlds into being. In the one, we experience – the live, complex, embodied, world of individual, always unique beings, forever in flux, a net of interdependencies, forming and reforming wholes, a world with which we are deeply connected. In the other we ‘experience’ our experience in a special way: a ‘re-presented’ version of it, containing now static, separable, bounded, but essentially fragmented entities, grouped into classes, on which predictions can be based. This kind of attention isolates, fixes and makes each thing explicit by bringing it under the spotlight of attention. In doing so it renders things inert, mechanical, lifeless. But it also enables us for the first time to know, and consequently to learn and to make things. (My underlining)

This gives us power. These two aspects of the world are not symmetrically opposed. They are not equivalent, for example, to the ‘subjective’ and ‘objective’ points of view, concepts which are themselves a product of, and already reflect, one particular way of being in the world – which in fact, importantly, already reflect a ‘view’ of the world. The distinction I am trying to make is between, on the one hand, the way in which we experience the world pre-reflectively, before we have had a chance to ‘view’ it at all, or divide it up into bits – a world in which what later has come to be thought of as subjective and objective are held in a suspension which embraces each potential ‘pole’, and their togetherness, together; and, on the other hand, the world we are more used to thinking of, in which subjective and objective appear as separate poles. At its simplest, a world where there is ‘betweenness’, and one where there is not. These are not different ways of thinking about the world: they are different ways of being in the world. And their difference is not symmetrical, but fundamentally asymmetrical. (The Master and His Emissary (pp. 30-31).

I have grabbed a long passage, but one that is very clear about the difference in the ways the two hemispheres work and produce distinct behaviors.

Caring (right) is fundamentally different from habits, routines or driven (left) behaviors because it is shaped by the peculiarities of the immediate world in which the action is about to occur. Empathy names the ability of actors to “read the mind” of others or place themselves in their shoes. Such understanding underpins caring behavior; it is shaped to “serve” something that needs taking care of out there. The right-hemisphere, may call on the left for input, but, ultimately, will say no to it, so that the actual act retains its sense of the immediate scene. Importantly the context of the moment is implicated in the act.

In dealing with the non-human world, some process similar to empathy would seem to be involved. The more general one of intuition fits. The right-brain cannot read the other’s mind as no mind is involved, so it has to make sense out of the whole world being presented to it before some intentional act follows. Intuition, McGilchrist writes subsequently, is the process by which we make sense or “understand” what is going on out in the world. It is the way our thoughts are connected to that world, not to the constructed replica resting in our left-hemisphere.

The whole of Merleau-Ponty’s philosophy of embodied understanding depends, in one way or another, on a fundamental distinction: that between two modes of encountering the world, which he calls ‘je pense’ [I think] and ‘je peux’. [I can or I may] The first deals with a mental representation in which we are quite separate from the world, and the question is, then, how our thoughts can be said to relate to that world; the second is an intuitive embodied awareness of the world in which we are already fully situated, a field of potential for interaction, something that comes prior to any conscious re-presentation. I believe he was articulating the intuited difference . . . between the world as understood by the left and right hemisphere, respectively. (McGilchrist, The Matter With Things (pp. 567-568). (My underlining)

The essence of the concept of care and its use iundescribing this fundamental way we humans act is captured beautifully in this short quote from The Master and his Emissary (p. 170)

“ The right hemisphere does not ‘know’ anything, in the sense of certain knowledge. For it, belief is a matter of care: it describes a relationship, where there is a calling and an answering, the root concept of ‘responsibility’.

It is not care in the emotional sense as in “I care about or for you,” but more like “I will take care of you.” It is exactly that sense that offers hope for me in dealing with the mess we have made of the world. If we recover our ability to care, we will begin to work deliberately (Remember that caring implies a sense of responsibility for whatever world shows up.) to avoid and repair the damage our collective left-brain has done over the centuries. Let’s hope so.