I have just completed a course at the lifelong learning institution I belong to about three novels of displacement. Basically they are about how people respond after suddenly being transported from a world in which they have been acculturated to a completely different one. One was The Hunger Angel, by Herta Müller, a Nobel laureate in literature. It’s about an ethnic-German Romanian man who is removed to a Russian labor camp during WWII, and describes how he survives there during the 4-5 years he is interned. Another is Primo Levi’s, Survival in Auschwitz, an actual recounting of his experience. Other fictional tales of displacement run the gamut from The Wizard of Oz, to Treasure Island or Gulliver’s Travels. What is interesting about all these different instances of displacement is how the protagonist responds.

Trying to understand how the various characters responded to the abrupt change of circumstances led me, not surprisingly for those who have been following my work, to McGilchrist’s divided-brain-model. And, again, I found it immensely helpful. For those not familiar with the model, the left hemisphere contains a representation of a world constructed from decontextualized fragments extracted from past experience. As such, it reflects, although not precisely, the actual world in which an individual has been immersed. The right hemisphere, quite the opposite, presents a contextually rich, contemporaneous world to an individual. The characteristics of actions by individuals reflect whichever hemisphere, in effect, is the master, runs the show, has the last word, or any similar analogy.

This dichotomy strongly counters the idea of a single self that is responsible for the actions that someone produces. It would seem that there are (at last) two selves, depending on which hemisphere is currently in charge. By in charge, I mean determining which of the two worlds was dominant in shaping the observed action. Both are always involved, but in different forms of interaction. The right provides the context for any (conscious) action as it connects to the real world, and provides aboutness or meaning to the actor. The left may take the reins and add what is considered appropriate to the immediate scene—some response based on its already formed collection of facts. Alternately, the right can accept, but filter, whatever facts are coming from the left, and construct the response that will be observed. In all cases, however, the the cognitive processes end in the right hemisphere, which activates the appropriate body parts for the subsequent action(s).

When the left prevails, the actions are considered routine and expected because they are based on the accumulation (in the left hemisphere) of beliefs and norms abstracted from previous familiar situations. Such routine behaviors are what we see at work or in any institutional setting because the rules that are embedded in the institutional structure have become embedded in the left hemisphere, and control the actor within the institutional setting. In non-institutional, but familiar settings, the process is similar. In this instance, we usually call the actions, “habits.” Cognitively, routines and habits are basically the same.

In non-institutional settings, any actions must be tailored to the immediate circumstances. Two possibilities arise. In one, the right takes charge and, accepting, perhaps, suggestions from the left, determines the subsequent action. The action, per se, has been designed to fit the immediate world, not the pseudo-world that has been stored in the left hemisphere. I have been calling such acts, with the right in charge, “care,” acts that reflect both the outside world and the actor’s meaningful interpretation of it. Such acts reflect the (conscious) connectedness of the actor to the outside world, or as I have been calling it—the real world. The other possibility is that the left hemisphere will seize control and select some action based on its disconnected world, using its already stored set of presuppositions it believes fits the present circumstances. In this case, the act will appear to be inappropriate or ineffective, except in random cases where those presuppositions do match the reality of the external world. They lead to acts deemed to be prejudicial, that is, not relevant or counter to the context of the real world.

So far, I have barely mentioned the word, self, but it is deeply involved in this conversation. The origin of the concept goes back to antiquity, perhaps to the idea of Plato’s soul, something immaterial in the body—his attempt to explain the force driving human behaviors. Self emerges as something humans possess that makes them distinct from other kinds of beings and is the source of identity, the distinctiveness of individuals. Self, seen this way, is singular: one individual, one self, except in pathological cases, like schizophrenia, where more than one self is attributed to a person.

Psychology, economics, sociology have evolved on such a unitary notion. Economics, stretching back to Adam Smith has assumed that the human self acts rationally in its own interest, seeking to employ whatever resources are available to their maximal or optimal utility. But economists, applying this model, have a hard time explaining why humans sometimes appear to act altruistically, that is, serving someone else’s benefit. To explain the apparent irrationality of this act, economists argue the the actor has some magical utility that values such acts sufficiently large, even if no material benefits accrue to the actor. No such contrived explanation is necessary, according to the divided-brain-model.

The divided-brain-model allows for the positing of multiple selves, each one lining up with some distinct combination of right/left hemispheric interaction. Altruism fits the caring self as I have described it. The historic, rational self of Adam Smith and others corresponds to cases where the left-brain dominates, that is what I have called routine or habitual. In fact, it is possible to develop an entire catalog of selves, each possessing a characteristic behavioral pattern, depending on left/right configuration. See the two following tables. The last column contains names or attributes generally associated with the particular behavioral mode (row). Viewed this, we express multiple distinctive selves as we pass our days and our lives. These tables are still a work-in-progress. 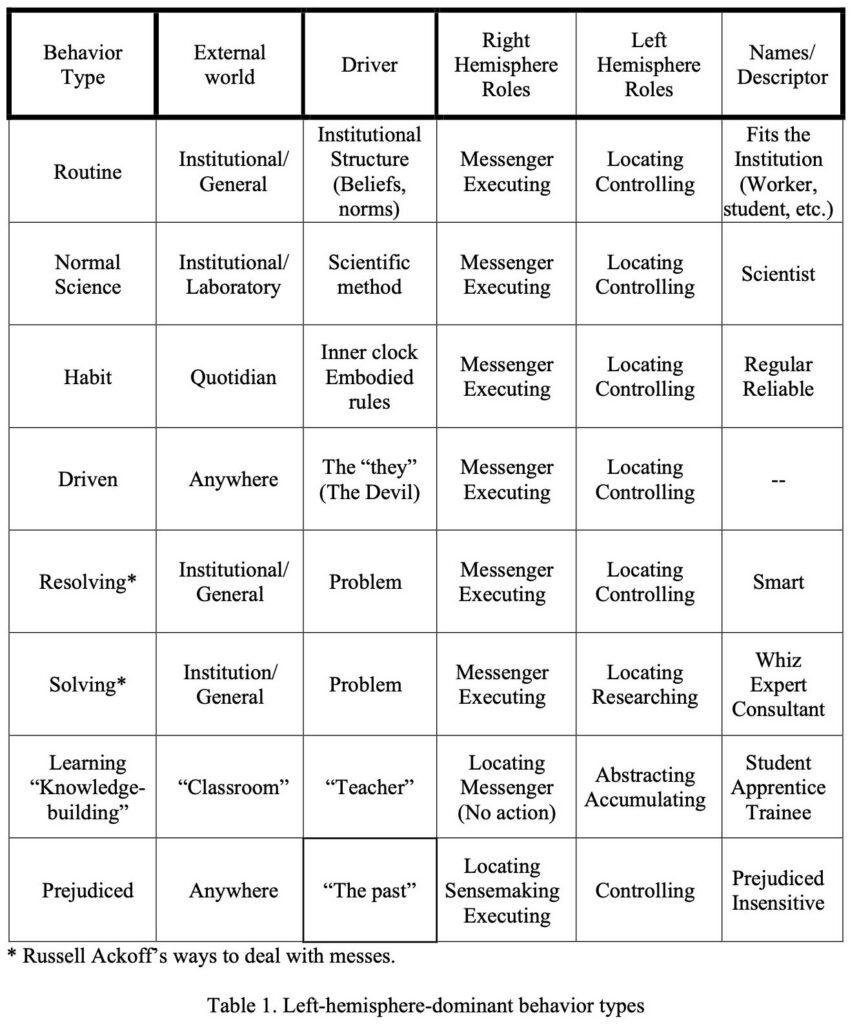 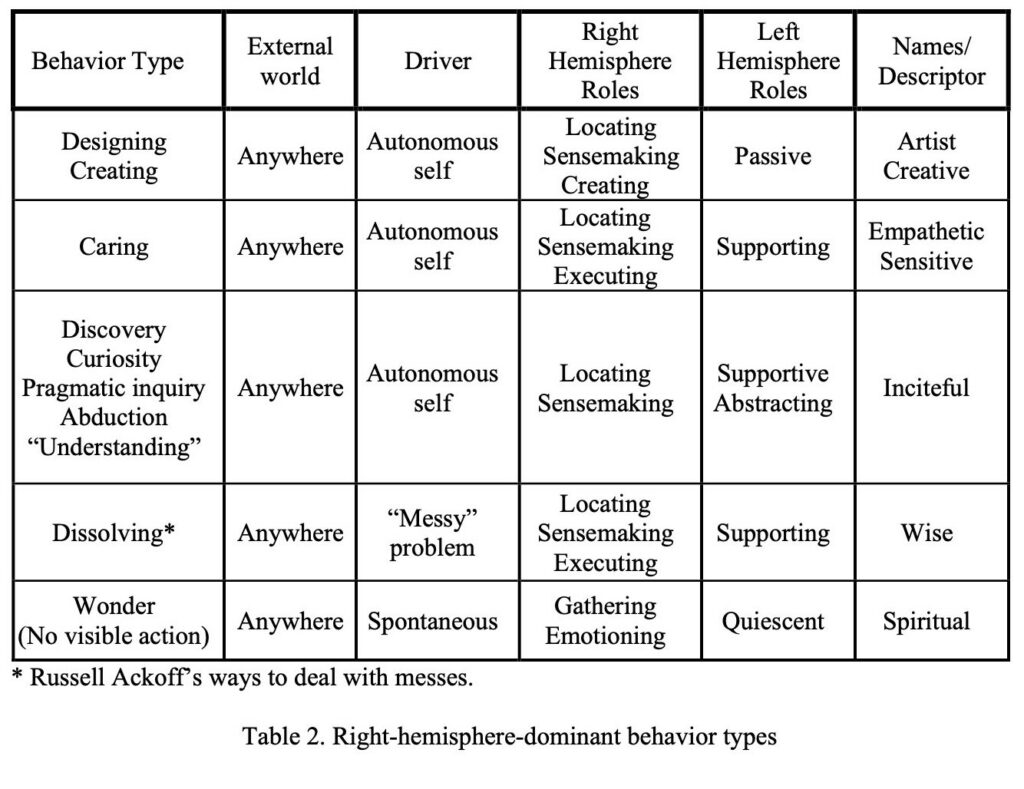 These two tables do not capture the intricacies of the actual processes occurring in the brain, but are, I believe, illustrative of the way in which characteristic behaviors align with particular patterns of right/left interactions. The key point is that human behavior is not determined by a single rational mind, performing some sort of calculus, the results of which lead to the actions subsequently observed. Indeed, it is unnecessary to posit the existence of some transcendental mind to understand the “nature” of human behavior. Anthony Damasio, a prominent neuroscientist, agrees, defining “mind” as:

The term mind … encompasses both conscious and unconscious operations. It refers to a process, not a thing. What we know as mind, with the help of consciousness, is a continuous flow of mental patterns, many of which turn out to be logically interrelated. The flow moves forward in time, speedily or slowly, orderly or jumpily, and on occasion it moves along not just one sequence but several. Sometimes the sequences are concurrent, sometimes convergent and divergent. Sometimes they are superposed.

This way of organizing observed patterns of behavior raises serious, critical questions about the reality of some kind of unitary human nature and of the “social sciences” that have developed on that premise. Much of philosophy rests on that presumption. It is understandable why this happened. The bulk of human activities are either habitual or institutional, even going back many millennia. These are dominated by the “rational” left hemisphere and, so, it is no surprise that serious inquirers might have alighted on the classic view of human nature and eventually of a rational mind. It explains enough of what can be observed to pass muster (and still, in general does). Other behaviors, such as caring or wonder, were simply deemed to be anomalous or tied to mysterious causes, like instinct or the “heart,” as opposed to the “head.”

Most importantly, this basically dichotomous structure tells us that changing behaviors to attain some desired normative outcome is not simply a matter of manipulating the processes in the left hemisphere. Modifying individual or collective behaviors requires attention to the particular hemispheric processes involved. Economic policy relates to the left-hemisphere and may be able to affect certain routine or habitual behaviors, but will not impact, for example, caring behaviors based on empathy.

That’s enough for this post. More to come, connected to this exposition of behavioral characteristics and the brain. Some of the topics I expect to cover are free will, ethics, factors that control which side is in charge at any moment, explicit methods to modify behavior, flourishing (always), empathy, prejudice, and more. I believe deeply that this way of thinking about the brain and how it determines our actions, and, consequently, who/how we show up in the world has immense power to guide us toward our dreams and away from the mess we are making of our home. But I need your help in developing the story, so please comment and share this, and, if you would be interested, I would be pleased to post some of your thoughts along with mine.