Systems dynamics, for those unfamiliar with it, is “is a methodology and mathematical modeling technique to frame, understand, and discuss complex issues and problems. Originally developed in the 1950s to help corporate managers improve their understanding of industrial processes, SD is currently being used throughout the public and private sector for policy analysis and design.” (Wikipedia) I used it to support my arguments in my first book, Sustainability by Design, that the persistent problems we face are the result of failures to understand their root causes.

The behaviors that underlie the failure to find effective solutions are, in systems dynamics terms, shifting-the-burden and addiction and are best illustrated by the archetype diagram below. 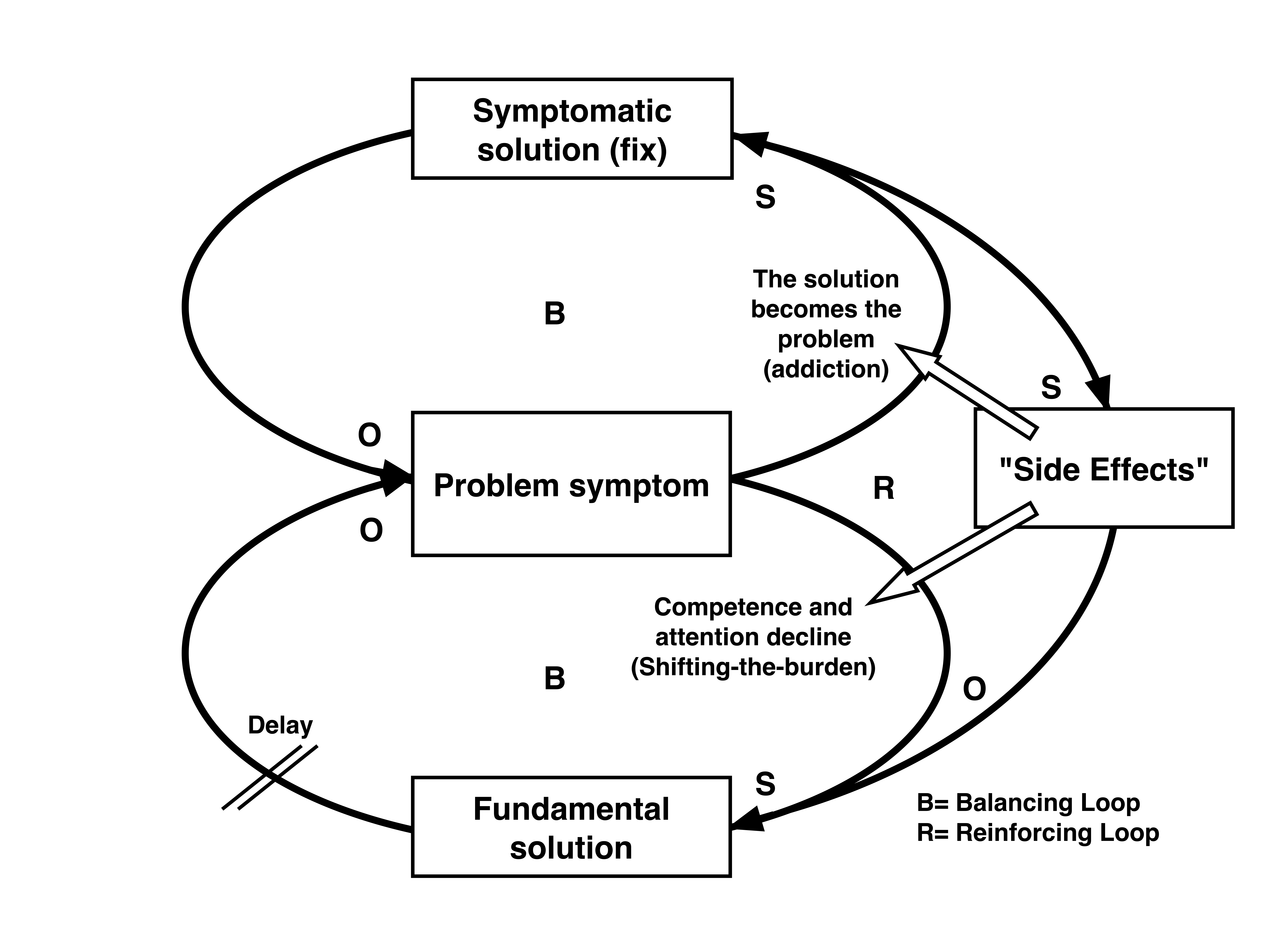 The upper loop, which by itself, represents another archetype, fixes-that-fail, is a common mode of behavior. In this pattern, the symptoms of a problem are addressed, but the causes are left in place. Eventually, the same or different problems will re-appear since the causes are still there. This pattern led to the admonition in my book that “reducing unsustainability cannot create sustainability.” Most “sustainability” programs operate only in the upper loop.

If the same “solution” is applied repeatedly, the situation may become even more precarious because, what might have been some attempt to follow the lower loop dealing with the cause fades from view. One classic case is that of a manager who, facing a deadline, does the required work that a subordinate employee failed to complete. Perhaps all right once, but if this pattern persists, the employee will never gain necessary the skills. By doing the work herself, the manager has shifted-the-burden away from the real problem.

The same general archetypal pattern also describes a more serious mode, addiction. It is a case of shifting-the burden on steroids. Not only does the old problem hang around, but the chosen “solution” creates a new unintended concern that shoves the old one aside. A classic case of this pattern in chronic alcoholism  It starts with someone under stress who begins to drink to find relief and thinks the problem has gone away. The stress, if unmitigated, will return and more drinking will be needed. Eventually, the now addiction to alcohol or some other drug, has affected the body and caused other problems. The original issue, whatever caused the stress, has long faded into the background.

Now having gotten into McGilchrist’s divided-brain model, I see a tight connection between this archetypal pattern and the way the brain is working. The upper loop corresponds to left-brain dominance. The problem is seen only from the generalized “knowledge” base of the left, devoid of the specific context. It can only try one fix after another. The word “fix” applies to any “solution” that is constructed from prior contextual knowledge, but is applied to the real, contextually different system in which the problem has shown up.

The lower loop aligns with the right side of the brain, the side that gets connected to the present system/world. It gathers in a holistic picture that includes both the isolated “problem” and also the context in which it is embedded. Responses to this contextually rich, present view require the creative power of the right. The knowledge base of the left will fill in some of the pieces, but ultimately, any solution that fits the complexity of the situation must be created by the right brain.

This alignment of the hemispheres with these archetypical behaviors points to the need for systemic transformational change practices, beyond simple fixes, to engage the right brain. The best-known example of one such practice is the Toyota Production System (TPS). It rests on a collection of practices that are explicitly designed to engage the tight brain and suppress the left. The “5 why’s” is a good example. By asking “why” continually, the responder eventually runs out of explanations offered up by the left-brain, and must begin to employ the right side.

Other well-known models, like the work of Peter Senge (The Fifth Discipline) call for new mental models, implicitly recognizing the role of the left-brain in keeping the system stuck in the upper loop. But if the right-brain is not primarily involved in discovering such new mental models, which are just as categorical and a generalized as are the old ones, are likely to lead to new problems. Getting to the roots, something the right, but not the left, is capable of doing is essential to transform the system to a state where the previous problems become resolved.

The difference in the way the hemispheres attend to the world explains, in part, why consultants are so popular. They come on the scene with different left-brain content, and appear to be able to offer solutions beyond those available internally. But, while their advice may look good at first, unless they have coincidentally addressed some root cause, the system will continue to disappoint. Most consultants, with their firmly entrenched beliefs, cannot do much better than can the home team. Exceptions are those outsiders that employ pragmatic methods, like the TPS, to seek an understanding of the system, first, and build from there. Further, since any system lives in a constantly changing world, new problems will always arise. It is instructive to think about the two pillars of the TPS: continuous improvement (or learning) and respect for people. The first reflects my comment about the inevitability of change. The second points to the importance of keeping the right brain, the side that connects to and can generate respect for others, engaged. These brain-oriented aspects are part of the reason the TPS remains the premier and most imitated “problem-solving,” quality management practice in play.