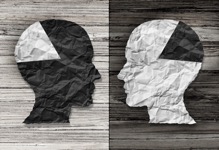 Evolution has endowed humans and many other animals with a brain that is bi-hemispheric. The great mass of neurons are contained in two separate halves. In his book, The Master and his Emissary, British psychiatrist and writer, Iain McGilchrist, argues that each side attends to the outside world in strikingly different ways that reflect their evolution. One half, the right side in humans, gathers information about the immediate world, a function derived from animals’ need to be alert for predators. The other half, the left side in humans, contains information necessary to perform essential tasks like feeding or gathering food. In our complex society, the left is the engine that allows us to function effectively in all the institutions in which we expend our lives.

In humans, the left brain acts like a catalog or sorting machine, taking apart and abstracting an individual’s richly contextual experience and placing the bits in metaphorical bins, now available to be drawn upon in new situations. In the course of living, the right brain takes in the scene, and can call upon this abstract “catalog” to help provide enough meaning to determine a course of intentional action. A newborn begins the process of filling up the left brain at birth, perhaps even in utero.

One critical consequences of this process is that individuals’ ways of understanding the world, something that only can come from already acquitted notions, is highly dependent on their personal history. They learn, over time, how to concatenate pieces from their storehouse in the left to make sense of the world and act in meaningful ways. Children in white families will abstract their experience of other humans as having arms, heads, legs, white skin and so on. These facts get placed in the bin called “friendly human beings.” They provide food, care, and all sorts of good things. They also provide “bad” things which can lead to trouble later as child mature, but the “facts” about these things goes into a different bin.

The left-brain will retain more and more abstractions as the child grows. When the right brain takes in a scene contained a non-white person, it will alert the right that there is something unfamiliar out there and beware because I (the left metaphorically speaking to the right) don’t have a coping plan available. In most non-human animals, the relevant response to this is to flee. In humans, the plasticity of the brain allows the left to modify its characterizations through experience and education, but the possibility that some action tantamount to fleeing remains.

The recently reported case of a white woman, Amy Cooper, calling the police when a black man, birding in Central Park, asked her to tether her dog, as she should already done, provides an excellent example of this cognitive process. Cooper had been working for a company with an outstanding reputation for dealing with diversity and had been given extensive training in co-existing with people of color. In this non-workplace situation, her brain bypassed all that training and produced an “unfriendly” response. Was this an act of prejudice? Yes, but not of malice. There was little else she could have done at that moment. Her response had already been lurking in the wings.

Our prejudices, better presuppositions, that is, everything stored in the left-brain, are essential to our personal and social lives. They provide us with the classified, abstract knowledge we use to shape behavior in the myriad situations that we find ourselves in the course of a day. Imagine having to start from scratch every time we intended to act. Prejudice has been mistakenly called an affect or attitude. It is more like a bin in the left-hemisphere that lacks a “fact” that characterizes something as friendly or some other non-negative term. By the time one becomes an adult, the brain’s plasticity, that is its ability to create new bins (assemblages of neurons) lessens, but does not disappear. Ignoring this cognitive feature will stymie attempts to remedy both personal and societal ills, which have become exacerbated in tases days of the pandemic.

The current rash of racial incidents and evidence of prejudicial behavior in the US has led to a call for reforms, many arguing that racial prejudice is structurally or systemically embedded in institutions, like school, police departments, neighborhoods, government and so on. It most certainly is and can be addressed by changing the way those institutions are constituted, but it will reappear, unless steps are taken to fill the “human being bin” of the left brain with friendly facts about people of a different color.

Anthropologists and sociologists have called attention to the tribal nature of human societies. In essence, the US is a multi-tribal nation. We have tribes constituted by skin color, by wealth, by religion, political persuasions, and so on. The very fact of these divisions is a sign that our left-brains contain different classifications and abstractions. We have learned to live side-by-side with some of these divisions, but not others. We no longer have religious wars, but use war-like actions on people of a different color.

The common good, something once shared in the left-brain of people of both political parties that kept civil wars from occurring, has been lost. And in its disappearance, we have learned how the power of institutional voices can affect individuals brains. For all too many, being politically left or right raise the same kinds of fear as does a person of another color.

I am not a brain scientist, but I am firmly convinced that the divided brain model accurately describes our cognitive system and its consequences on individual and social behavior. I suspect that it is hard to empty the bins, that is, change the neuronal structures, once they are formed. The case of Amy Cooper suggests that to be the case. But they can be enlarged by experience and education that softens the edge of the threatening other so whatever is in view can be recognized as friendly and, thus, produce the kinds of social action essential to flourishing lives and nations.

On another related note, there is a difference between prejudice and racism or any other kind of ism. Prejudice is inherent in the way the brain works. Situations are automatically pre-judged, that is, given meaning based on stored-up generalizations, gleaned from the past. They are embedded in the stories our brains tell us to make sense of whatever we encounter. Racism is different. It is an explicit set of beliefs that there are differences among races that should be considered in acting. The belief in white superiority is a form of racism. Like any “ism,” racism can be unlearned and replaced, but the automatic response to the “other” is likely to stay forever.