“According to Diogenes society was an artificial contrivance set up by human beings which did not accord well with truth or virtue and could not in any way make someone a good and decent human being; and so follows the famous story of Diogenes holding the light up to the faces of passers-by in the market place looking for an honest man or a true human being. Everyone, he claimed, was trapped in this make-believe world which they believed was reality and, because of this, people were living in a kind of dream state.” (From the Encyclopedia of Ancient History)

He would be doing the same thing today. There is little truth or virtue in the way we are conducting our social affairs. Truth, here, refers to the way we acknowledge the workings of the real world out there and not the one we have constructed from whole cloth. Truths tell us how that world works and allows us to act coherently. The Greeks argued that virtuous living was the glue that sustained orderly societal human life. An interesting dichotomy. One rule for the natural world and another for the human world.

Particularly interesting because these two categories align with the way the two brain hemispheres work. The right hemisphere is the one that connects us to the world and is always proximate to whatever actions we take. It connects our bodies to the world both as the first to take it in and the last in the ensuing cognitive processes that produce the actions we take.

Societies and every established institution within it can function only if the players follow the rules and behave according to its norms. Those norms and the beliefs on which they are based are stored in the left brain hemisphere awaiting requests from the right to offer it appropriate actions to take according to the immediate situation. It knows, based on the successes of past experience, which ones to select and send over to the right. As long as all the players share or are willing to accept the same beliefs and norms, they can act consensually in addressing whatever tasks are at hand, whether they involve work or conversations. If not, some form of coercion or compensation will be required. If the left has nothing to offer, the right will have to be creative or the current action will come to a halt.

If any of the players/actors has an “alternate set of facts” in the left brain, the possibility of coordinated action, whether consensual or not, is lost. Moreover, if such facts have already been embedded, the left-brain will hold onto these facts, even in the face of reasoned arguments by others, and may even out up a spirited defense of them. In the extreme, if the outside situation does not appear fit any of the facts it holds, the actor will, given the evolutionary role of the left-hemisphere, take some defensive or protective action. This pattern has become all too familiar today.

The Greeks held virtues to be a particular kind of truth, one that relates to the way the human beings should act in order to lead normative good lives, individually and collectively. For Aristotle, for example, eudaimonia (flourishing or well-being) was the highest good and would emerge through virtuous living. He laid out a system of vices and virtues in his Nicomachean Ethics. I have summarized his scheme in the following table. 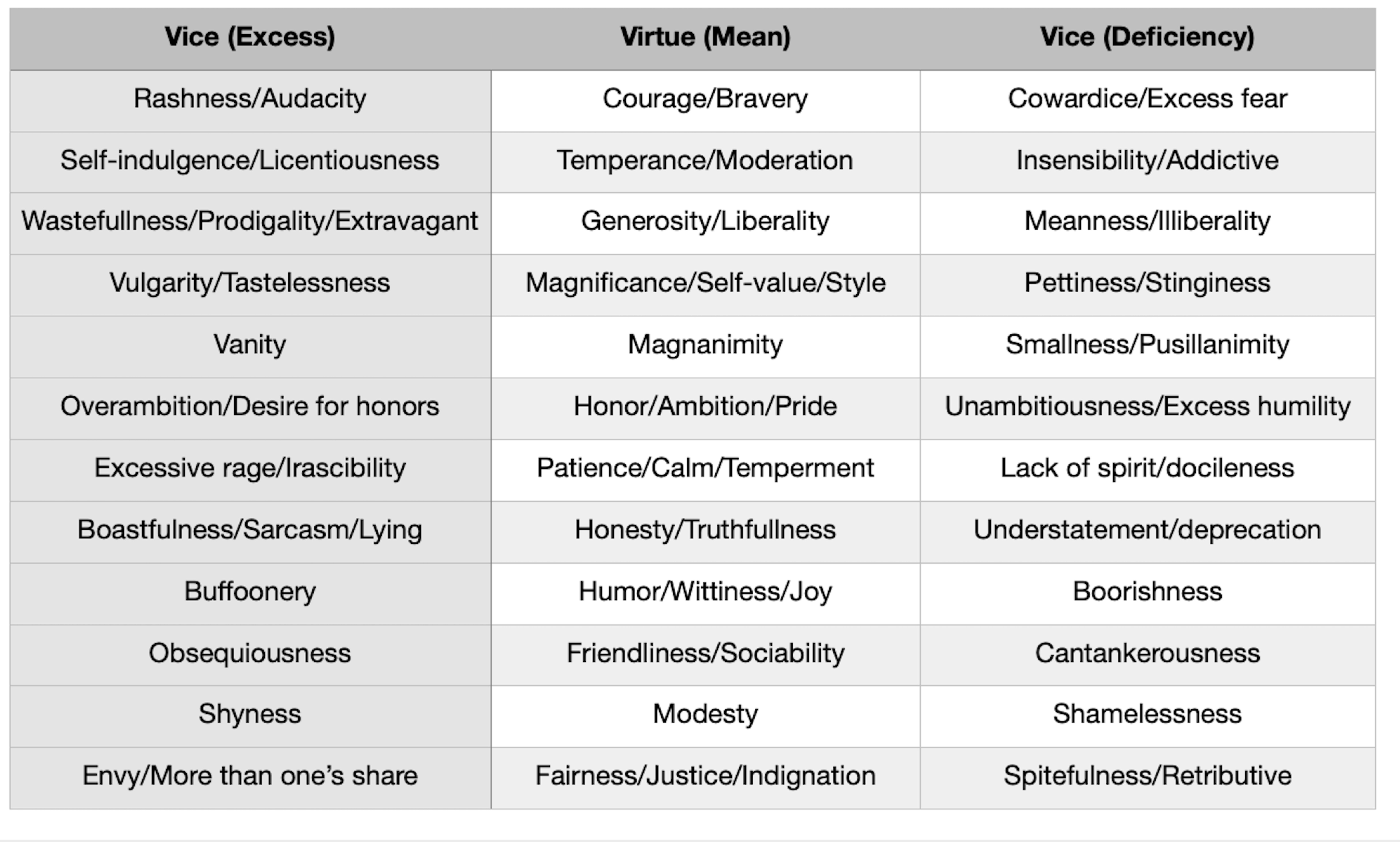 He describes all of the modes of action as dispositions, some sort of tendency to act. He takes pains not to define any of these too precisely and notes that sometimes it is appropriate to act according to one of the vices.

The man, however, who deviates little from goodness is not blamed, whether he do so in the direction of the more or of the less, but only the man who deviates more widely; for he does not fail to be noticed. But up to what point and to what extent a man must deviate before he becomes blameworthy it is not easy to determine by reasoning, any more than anything else that is perceived by the senses; such things depend on particular facts, and the decision rests with perception. So much, then, is plain, that the intermediate state is in all things to be praised, but that we must incline sometimes towards the excess, sometimes towards the deficiency; for so shall we most easily hit the mean and what is right. (Aristotle, Nicomachean Ethics, (1999),Translated By W. D. Ross, Batoche Books, Kitchener: Bk 2)

His central theme is that to achieve a state of eudaimonia, one had to live largely according to the virtues. His idea of what these are is mostly captured in this excerpt from his book. A key theme is that virtues lies between the extremes of behaviors, that is, the vices. His virtues and vices show up in practice as behaviors that are deemed to be “right.”

When I examined the table, I found that I could superimpose a structure, based on McGilchrist’s divided-brain model. The central column matches actions that result from a balance between the two hemispheres. They are consistent with the situation as acquired by the right-brain, and are well-crafted so as to be effective as the left brain would have it when it works cooperatively with the right. The two are balanced—a word uncannily related to Aristotle’s use of “mean.”

The outer columns correspond to situations where the left-brain has exerted itself without regard to the world being presented to it by the right. The first column, the vices of excess, result largely from the left brain imposing its view of the world and its selection of appropriate action. It reflects the solipsistic character of left-brain domination, that is, it superimposes its world view regardless of what it actually out there at the moment.

To an observer, the consequent actions might be judged as rash, vulgar, or wasteful because they do not reasonably fit the conditions. Boastfulness and lying are “truthful” to the left brain, but do not, again, match the situation. Rage arises when others do not accept the inner world inherent in the actors words or acts as valid. It doesn’t take much to see all the excesses at products of the solipsistic left-brain.

The deficiency vices can also be related to an imbalance between the hemisphere, but in this case, they are due to the absence of a well-formed inner world and its stored up coping mechanisms, except for a strong focus on the actor, herself. Without an ability to hand the right-brain the means to cope, the left replaces the world with its sense of self as if it were the only thing worth considering. These vices are largely narcissistic, e.g, pettiness, meanness, smallness, cowardice, cantankerousness. The fit is not perfect, but is close enough to suggest that Aristotle’s vices and virtues are organized according to the divided brain model. There are too many matches to write off Aristotle’s work as purely an intellectual exercise.

ps. Who can you think of that illustrates almost all of the vices and none of the virtues.