The first part of the title comes from an op-ed piece in the NYTimes, by Jon Gertner, the author of the forthcoming book The Ice at the End of the World. The whole title of the piece is “Maybe We’re Not Doomed After All: We have the brains to slow down climate change. Do we have the will?” His book is about the massive Greenland ice sheet and its internal historical record of atmospheric conditions, created as the ice accumulated over the years. Ice cores produce evidence of changes in the atmosphere, for example:

Amid the trace chemicals that turn up in the old ice, there is an unmistakable fingerprint of lead from a few thousand years ago — traces from silver smelters in Europe, during the height of the Roman Empire, which released lead into the air that was deposited on the icy surface of Greenland. In more recent records, we can see vestiges of the metal from the fumes of the early years of the Industrial Revolution and, later still, the residue from leaded gasoline. . . But by the early 1990s, these traces had receded from Greenland’s snow and ice. That was after new regulations and new products — created over the opposition, incidentally, of fossil-fuel concerns — eliminated the lead that was poisoning us from gasoline. 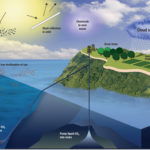 In the op-ed piece, he, then, makes a big jump from pointing to the implied technological advances in the historical record in the ice sheet to claiming we have enough accumulated knowledge to combat global warming through advanced form of technology. Geo-engineering, that is, modifying the Earth’s environment by the use of technology on a grand scale, can do the job, if we only had the will to apply it. He provides several examples, including changing the albedo (reflectivity) of the Earth by seeding the atmosphere with fine particles and another, related to his work in Greenland, by increasing the ice sheet by using “wind power in winter to pump [cold] water from the depths of the Arctic Ocean to the surface to thicken sea ice so that it is more resistant to melting.” He notes, in passing, that it would take 10 million floating windmills.

In his claims about the sufficiency of technological means to combat global warming, he makes two serious errors, one is that technology can keep human civilization, as we have known it, intact. The other that it is a lack of will that is the obstacle. Wrong on both accounts. system dynamics has models for the kind of mistakes he makes. His proposed solution is an example of several systems dynamic archetypes. The first is fixes-that-fail. This pattern results from attacking the symptoms, not the causes, clearly the case for applying technological remedies. Always looking to such fixes, a form of technological optimums (whether grounded or not), fits another pattern, shifting-the-burden, when blind reliance on some categorical type of fix, shifts attention from even seeking a casually-related look.

Lacking the will to try something different fits this pattern. It’s not so much a lack of will as always falling back on some habitual way of solving problems. The failure here fits another archetypal case, the tragedy of the commons. Individual nations perceive benefits by economies that create global warming, so continue in their ways until some tipping point occurs that destroys or greatly diminishes the common resources, the Earth, itself, in this case.

The important point is that Gertner and so many others writing in the same ilk fail completely to look toward the causal factors (many) that have created the problems they seek to mitigate or eliminate. Among these, one finds: economic growth, reliance on fossil fuels, population growth, beliefs about human nature, nationalism, etc. All contribute to the changes now being seen, and, under addressed, will continue to drive the system, eventually overwhelming any attempt at getting rid of the symptoms.

My own favorite culprit is the error about human nature in modern cultures, now spreading far beyond the so-called Western nations. Modern capitalist political economies are based on the assumption, going all the way back to Adam Smith, that humans are insatiable, need-driven creatures, but it seems that this is not actually built into the human genome. Human “nature” is strongly influenced by the balance between the two brain hemispheres. I have written about this in many past blog posts. My new book, which will emerge in August, is built on this finding as the primary causal factor in our concerns about the failings of our culture to keep us out of harm’s way.

After having undergone shifts in the balance between the left and right hemispheres over the long history of the human species, we moderns have come to be strongly dominated by the left side of the brain, the side that looks to control the outside world. Consequently, it sees everything out there as some sort of commodified, generalized resource, including other human beings, to be used. The right brain, when it is the master hemisphere, looks at the world out of a caring, empathetic stance, seeking solutions tailored to the circumstances, rather than coming from abstract theories.

Technology does have a significant role in a right-brain dominated world, but should be focused on maintaining the mastery of the right-side, not in its typical left-brain manifestation as tools for control. Gertner and other proponents of technology as ways to fix the world miss this point. While technology, alone, may, in fact, mitigate problems, it will eventually fail as the real causes continue to upset the system.