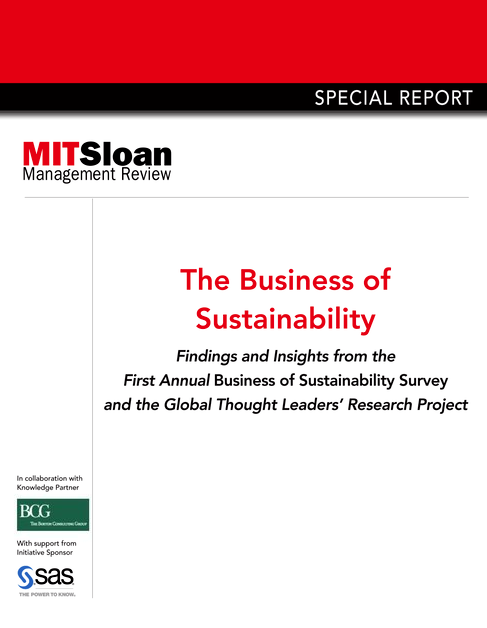 The headline of this post is the title of a[ just released report](http://www.mitsmr-ezine.com./busofsustainability/2009#pg1) published jointly by the Boston Consulting Group in collaboration with the Sloan Management Review. There is much in it worth reading and I will make it the subject of several posts. (Disclosure: I was one of the “thought leaders” interviewed by the Sloan Management Review in the development of this report.)
Today I am simply going to dwell on the title, *The Business of Sustainability*. I’ll bet that most of those that read the report or news about it haven’t thought about the title. What is the “business of sustainability? Before you read on, stop and think about this question. For help, here’s a few paragraphs from the report:
> Sustainability is garnering ever-greater public attention and debate. The subject ranks high on the legislative agendas of most governments; media coverage of the topic has proliferated; and sustainability issues are of increasing concern to ordinary citizens around the world.
>
> However, the business implications of sustainability merit greater scrutiny. Will sustainability change the competitive landscape and reshape the opportunities and threats that companies face? If so, how? How worried are executives and other stakeholders about the impact of sustainability efforts on the corporate bottom line? What—if anything—are companies doing now to capitalize on sustainability-driven challenges? And what strategies are they pursuing to position themselves competitively for the future?
I also did some web surfing and found many entries referring to this phrase.. Another comes from an-about-to be published encyclopedia, also entitled, [*The Business of Sustainability*](http://www.berkshirepublishing.com/brw/product.asp?projID=79). The editor says about it:
> The existence of The Business of Sustainability reflects a new competitive context transformed by rising fuel prices, widespread concern over the impact of climate change, and heightened consumer awareness of global health issues. Sustainability is being re-framed with an explicit pro-business agenda based on the power of innovation to support and serve the globe’s seven billion inhabitants without compromising the ability of future generations to meet their own needs.
If sustainability is taken to be a desirable property of the whole social system (as I do), then does this construction have any more meaning than the business of justice or security or any other basic social goal? What about the “business of life?” I don’t think any of these are meaningful, and diminish and vitiate any discussion that goes under such rubrics.
Businesses come in all sizes and shapes, but have one thing in common that constitutes them as a “business.” They make offers of goods and services to markets composed of willing buyers. While doing this, they contribute directly to the customer’s satisfaction, but indirectly affect the whole societal and natural system. These unintended consequences oppose and erode the positive ends provided by the delivery of these goods and services. Until the Civil War, slavery was considered acceptable in doing business. The situation was not sustainable (nor acceptable) from a human perspective. The continued presence of slavery threatened to bring down the whole societal system of that time.
Now we are in a similar situation although the details are very different. Human satisfaction has become predominantly measured by wealth, including all the things that can be obtained in the marketplace. Slavery is no longer acceptable, but, in its place, we tolerate huge disparities in the ability to acquire the goods and services that count. The failure to provide universal health care is an example. The environment which serves as the fundamental life support system for all life is systemically being destroyed.
Business, the same business that is now supposed to become the business of sustainability, is a major factor in creating this situation. Not the only factor, but given their great power to shape public policy, the most powerful actor in the game of life. It seems ironic at best and insane at worst, to turn now to business as the deliverer of sustainability, whatever we mean by that term. Business surely has a role, but is has to start with accepting their historic contribution to the debit side of the societal ledger.
A close reading of the above-mentioned report and of other business-related claims to sustainability suggests that this strategy is grounded on technological innovation and efficiency. Technology and efficiency are related, but neither has the inherent potential to turn the tide of unsustainability. Efficiency is not valuable per se but only as a way toward more production and consumption. If the added output would be put toward reducing economic disparities world-wide, maybe it could count towards sustainability, but almost all of what I read is directed toward our already sated society.
My argument against mislabeling economic and social actions as contributing to sustainability is that it hides the real causes and turns attention away from attacking unsustainability at the roots. This is an old and universal problem. Marx and the critical thinkers that followed him showed us how difficult it is to dig deep enough to unearth the real factors that create social and natural dysfunction. He did not have a solution that has worked, but that cannot be used as an argument to stop digging down and discovering something that has promise in today’s world. The business of sustainability only attacks the issues at the edges. Can it be that our existing political economy is not equipped to deal with the present globalized world where the limits and cracks have begun to show themselves? If I had to put this conundrum in a single sentence, it might be, “Can Wal-Mart be a leader in reducing levels of consumption?” Such business strategies might really be the business of sustainability.

One Reply to “The Business of Sustainability”