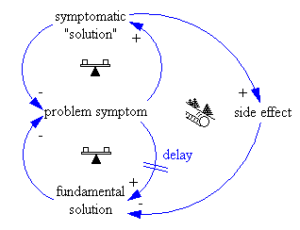 The danger in focusing on such “solutions” is that insufficient attention will be paid to more deeply rooted causes. In systems-dynamics lingo, such defocusing is called shifting-the-burden (see image). This occurs when little or no attention is given to finding and addressing root causes. Root causes are those aspects in complex systems that are often found buried deep in the hierarchy of determinative relationships. I believe that this is exactly what is happening today with virtually all discussions about climate change.

The argument that follows is not against applying fixes altogether, but only in conjunction with sufficiently large and comprehensive attacks on the root causes. If the root causes are left in place, the fixes will very likely fail sometime in the future. Fixes-that-fail is another systems dynamics archetype.

So how can we uncover the root causes of climate change. I think I already know the answer, but let me apply a powerful method, developed by Toyota and central to their production system (TPS). It is simple in structure: ask why five times in succession, and, by the time to get beyond two or three, you are  likely to light on a root cause. So let’s begin by starting with this problem: The Planet is warming, which increase is changing climate and producing significant threats to human settlements and to natural systems.

Why #1 Why is the Earth heating up?

Answer #1 Because emissions of so-called greenhouse gases are trapping more and more of the incoming solar radiation, resulting in increasing global mean temperature and more variability in climatic behaviors. This is the level where the current focus is directed.

Why #2 Why are these gases causing a problem now when they have been getting into the atmosphere for a long time?

Answer #2 Because levels of human consumption and production have increased to the extent that more greenhouse gases are emitted than can be absorbed and removed, so that levels have been rising, essentially from the beginning of the industrial revolution in England in the 1800’s. This is where almost all current activity is focused.

Why #3 Why has industrial production and consumption increased so much?

Answer #3 This answer has two parts. 1. Because population has been growing exponentially, rising from about 1.5 billion in the mid 1800’s to about 7.5 billion today and has been projected to reach 9 to 10 billion by 2100, both levels that far exceed the Earth’s capacity to support modern, developed human settlements. 2. Because people have become richer and demand more material goods.

At this point, the scheme has to bifurcate because the two parts have different root cause pathways, but, curiously end up at the same place.

Why #4 Why has population growth exceeding the carrying capacity of the Planet?

Answer #4. Humans are animals, and are subject to the same natural laws that govern population dynamics of other species in ecological systems. The most basic law is that population levels beyond some sustainable limit are unstable and will crash at some time. For other than human species, populations are maintained at sustainable levels by predators, disease, and the availability of food. For humans, none of these three factors are relevant. Humans are at the very top of the predator chain and have no predators beside other humans acting in times of war and domestic violence. Diseases still do kill humans, but have largely been brought under control through medication and vaccination. The present pandemic is severe, but will not make a significant dent in global population levels—total global death are currently around 1,500,000 with a vaccine on the way. The major factor in allowing population to exceed some safe limit is the availability of food. Malthus’s dire prediction has been overturned by modern agricultural methods that permit sufficient food production to feed all the people on Earth. Distribution of this supply is uneven, however, so that poorer societies have shorter and less healthy lives.

Population growth is not uniform with higher rates correlated with poorer societies. Affluent societies approach or attain replacement level after some level of wealth has been reached. Population growth levels, as measured by the difference between birth and deaths per capita, in the poorest countries are around 4 times that of the United States. China and the United States are about the same. Most of the continued growth occurs in these poorer countries. About half the global population is at or less than replacement rate. Poorer countries still have very high rates relative to replacement, e.g., many African countries are a 5-6 times the replacement rate. The Chinese one-child policy was located at this level, but had its roots in the level that follows.

Why #5 Why are some countries far exceeding replacement rates?

Answer #5. The simplest answer to this question is poverty. The connection between population growth and wealth is quite strong and is being demonstrated in the two largest nations on the Planet. China has already attained replacement and India is approaching it. With a very short life span due to disease, war and famine, families in poor countries have more children, in part to maintain the species and in part to assure adequate labor for the survivors. Birth control is relatively unavailable and educational levels so low as to render it ineffective. International reliefs effort mitigate these causes somewhat, especially in eradicating traditional sources of endemic diseases, but may have perverse effects by lengthening life span without reducing birth rates. Current aid programs are far too little to mitigate the maldistribution in affluence.

Why #6 Why are some societies so poor and other so rich? (Because the Earth System is so complex and interconnected, it has taken more that five “whys” to get to this point.)

Answer #6. Again the answer has multiple aspects but most can be traced to the dominance of the left-brain. The left-brain seeks to control the world and has been very successful in doing this, as evidenced by the rise of affluence globally. It is behind the growth of scientific and technological knowledge with which the productive structures of modern cultures are erected. It is also behind the colonial imperatives that impoverished much of those societies that remain very poor. Conversely, the role of the connected right-hemisphere has been reduced, dimming recognition of the connectedness of all humans as a species and our species interconnections to and dependence on the global eco-system.

We are one of a few so-called (by the sociobiologist E. O. Wilson) eu-social species, able to co-operate in manifold ways, mediated by our linguistic capabilities. It is likely that this characteristic of H. sapiens was instrumental in our development to become the dominant species on Earth. But the right hemisphere of the brain and our caring nature has shrunk to the point that cultural sub-species, defined by national boundaries, races, religions and other delimiting traits, cannot recognize that the ties that bind us together and to the earth are critical to our survival. (See Iain McGilchrist, The Master and His Emissary)

Climate change and global poverty in a world of vast riches is a classic cases of the tragedy of the commons. The wealthy, left-brain societies see no end to the wealth that is available by exploiting the global commons, and have constructed political economies around continued growth as the keystone. The left-brain, in individuals and in a metaphoric collective sense applied to societies and institutions, cannot apprehend complexity and fails to account for the internal interconnectedness that is producing the very problems that are being faced. The modern left-brain tends to homogenize or commoditize people and ecosystems and fail to account for the variations that actually drive system behavior.

Why #4. Why do people in developed countries want evermore material goods?

Answer#4 Because major political economical institutions reflect norms and beliefs based on the Smithian/Maslovian model of human nature that argues that people are insatiable need-satisfying creatures. This belief underlies neoclassical economics and drives economic policy in every industrialized and industrializing nation. Nobody is paying any attention to this level. Technology, policy, and cultural norms are continuing to strengthen the collective left-brain.

Why #5 Why are people needy?

Answer #5 Because the left-brain hemisphere has taken charge and runs modern, industrial consumption-based societies. Modern, industrialized societies are fundamental left-brained and ignore the systemic consequences of  growth. The left-brain demands certainty and believes it can provide it by using technological and technocratic means to control and manipulate the social and natural worlds.

Why #6 Why has the left-brain taken over?

Answer #6. Because since the beginning of modernity, from the Enlightenment onward, literacy and science have built the power of the left-brain at the expense of the right. Awareness of and attention to the connection between people and the natural system have diminished as the right-brain’s role has been fading. The subjugation of the empathetic, caring aspect of human “nature” has paralleled the growth of the analytic, detached left brain.

This is where the chain of why’s ends and points to the place where permanent remedies for climate change and other system threats must start. The Earth System in which all the issues discussed here take place is complex with manifold interconnections between human institutions and the natural system. One reason that most analyses stop at the first or second question is that the dominant left brain deals very poorly with complexity and always wants to take things out of context so that it can work with a simple linear cause-effect way of solving problems.

Climate change cannot be effectively addressed without attending to both branches of this simple, but powerful, root-cause analysis. Ultimately, the solution rests in restoring the brain’s balance so that the connectedness of the right brain will not allow the left to ignore the roots of the matter. If and when the right-brain takes the reins, humans will spend more time nurturing relations with others and with the non-human world than looking for things to consume beyond what they need to exercise their caring half. Technology will and should play a role in holding off the tipping point when the instability grows beyond our capability to cope long enough to allow the cognitive shift to take place, but must not become the primary path to success.

The affluent world is clearly more responsible for the present threat level and has the means to reduce it, but any significant move will take a paradigmatic shift in mindset. We have known this ever since the publication of Our Common Future (the Bruntdland Report), but have yet to take it seriously. The richer nations continue to grow, not yet sustainably by any measure, and have left the poorer ones to struggle with the insidious effects of wide-spread, systemic poverty on the Planet.

The complexity of the situation does not permit precise predictions so it is impossible to treat this as a simple, but complicated problem, addressable by the usual analytic frameworks. Yet that is what almost all conversation about climate change is based on. The right-brain is telling us to begin at the bottom level right now.

One Reply to “The Hidden Danger in Global-Warming [Quick] Fixes”