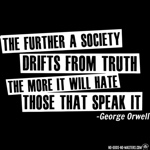 I have not abandoned my web site although it would seem to be the case. The site went off-line a couple of weeks ago because I was hacked. Fortunately I keep a backup and was able to recover pretty quickly. The primary reason is not that, but simply a block that shows up every time I try to post something meaningful. I can’t find anything in the flurry of news and events I intersect with every day. I feel like I am walking through some distant foreign land I barely recognize. How can I write about reality and its child, facts, when there is little listening or understanding about these concepts that are central to human existence?

I should be up, not down. After almost two years of trying to get a new book published, I finally have one that, save an unexpected glitch, will publish it after the usual editing and preparations. I thought it would offer an uplifting and hopeful message to a world that was ready for it, but, now, I wonder. We are still ready for it, but are being faced with more pressing concerns.

Sustainability is essentially an existential idea. How we can maintain a world that works for all humans and all other creatures? I still believe that our fundamental existential threats lie in the deep “facts” we carry about the nature of reality. It’s curious that in my system of thinking, these are alternate facts, not quite untrue, but also not the right ones on which to base a lasting, flourishing society. The substructure of beliefs needs to be augmented, if not replaced, by those I have pointed to in this blog and in my books, but that would do nothing if the structure of our society collapses first. Right now, the historic foundations of our country are being replaced by a web of lies. Our public conversations become more Orwellian with each passing day.

More than Orwellian, which aims to keep the entire population under the thumb of the powerful who govern (rule) it, present day speech coming down from on high is making life more and more dangerous for those seen to be “Others (capital “O”).” We are, indeed, a country of many others (small “o”) having all but rid the land of the original inhabitants, the Native Americans. We are other by virtue of our different skin colors, ethnic heritage, economic status, religion, political outlook, etc. These are simply facts. Our otherness becomes Otherness when we become defined by those kinds of characteristics, and are manipulated or controlled solely because of the differences between any of these traits and those of individuals or groups who possess adequate power to exercise control.

Replacing the beliefs that have begun to create more harmful unintended consequences than producing some common good is a very difficult and takes a long time. What is happening right now is a serious distraction from that task. Our President and his enablers and cronies have set in motion a set of centrifugal forces that are breaking the ties that have bound us together through good and bad times. We have to correct this quickly lest the Othering grow to intolerable levels, not that any amount is morally acceptable.

I am currently involved in an exercise on having ‘Difficult Conversations” sponsored by my synagogue. It is about how to hold conversations with people who do not share your important values. I find it very helpful in bridging the chasm between myself and others I want to relate to and work with toward some common goal. But it is not at all helpful nor, I think appropriate, for dealing with speech that incites violence, or ,as some call it, dangerous speech. I see an equivalence to what is now legally categorized as “hate speech.”

I recently read a piece that included an academic’s list of characteristics that define dangerous (hate) speech.

To rise to the level of dangerous speech, at least two of these five indicators must be true: (my emphasis)

•  A powerful speaker with a high degree of influence over the audience.
•  The audience has grievances and fears that the speaker can cultivate.
•  A speech act that is clearly understood as a call to violence.
• A social or historical context that is propitious for violence, for a variety of reasons, including long-standing competition between groups for resources, lack of efforts to solve grievances or previous episodes of violence.
•  A means of dissemination that is influential in itself, for example because it is the sole or primary source of news for the relevant audience.

Not only is it clear that Trump and his apologists are uttering dangerous speech; the danger has, sadly and shamefully, shown itself in real outcomes. Stopping this in its tracks is far more important than pushing for the kind of longer-range action I have been calling for. I do not mean “give it up,” but there is only a small chance that any of the mind-challenging ideas and new practices I offer could be heard and sink in under the volume of dangerous speech bombarding the public’s ears.

That’s why I have been mostly silent on this blog for the last two years. It seems self-serving to trumpet my own thoughts for a flourishing future, when the present is so endangered. I hope that, by the time my next book does hit the street–maybe 5 or 6 months the publisher tells me, I will be more comfortable in returning to flourishing and a new vision of the future. To keep my thread from breaking entirely, let me remind you that Othering and dangerous or hate speech is the epitome of the left-brain in full control. Empathy, a product of the right-hemisphere, will have flown away. Any expressions of it are bound to be false; unfortunately they can be nothing else. The complete control of the left-brain can be seen in the Othering talk that always follows in short order after any apparent show of empathy or understanding. If the speaker were any other than the President, who by oath swears allegiance to take care of all members of our Nation, I might even feel some empathy for the obvious hollowness of his life.