This is not about church and state as the title might suggest, but about the growth of the establishment. This Saturday, like almost every one during the summer, I went over to the Brunswick farmer’s market. It is always a happening, a wonderful gathering of offerings and excited people to enjoy them. To be allowed to show the wares at this market, the goods have to be grown or made locally. The range of stuff is amazing.

This season, two booths are selling farmed oysters, a product being pushed by both Maine economic and marine resources agencies. Oysters, as filter feeders, clean seawater of algae and other suspended material. They provide a new economic resource to a state, often stretched to find income sources. My favorites still show up. I leave early to be sure to get a dozen or two of pastured eggs from Winter Hill Farm. Between extra-large and jumbo, they can’t be beat any way I cook them. Sometimes I add some fabulous cheese from the same booth. Here are a couple photos from today’s gathering. 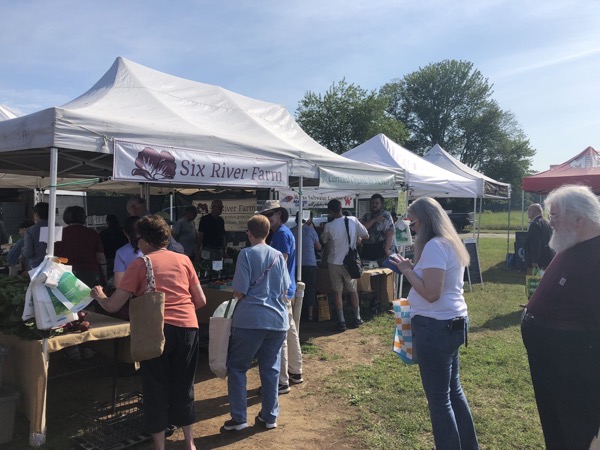 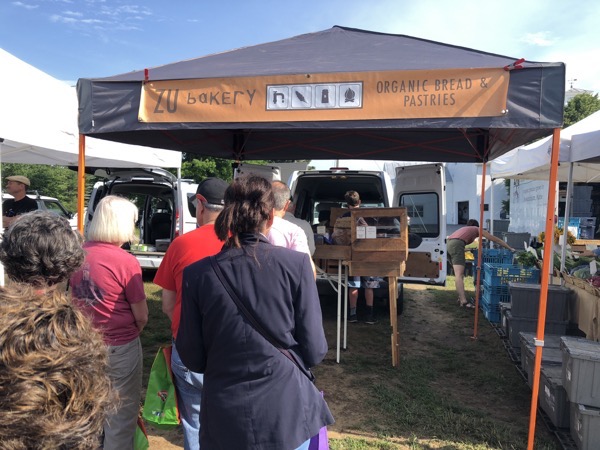 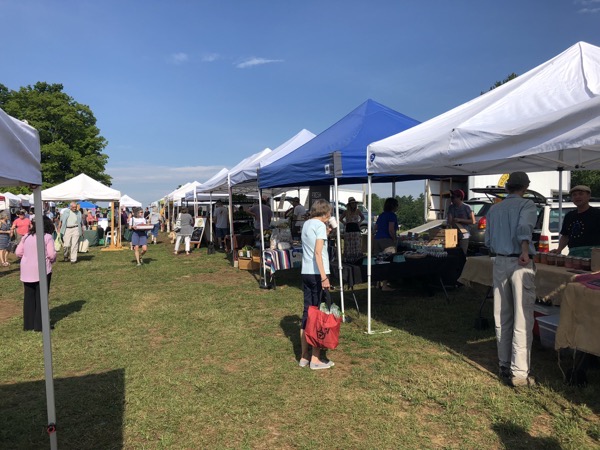 Then, I’m off to pick up my pain au raisins or d’amandes (alternating weeks) from Zu bakery. Too good when they are fresh to freeze for later, they come home to be eaten immediately. Barack’s bread is also the best around, although a new baker is pushing him this year. I’ve stopped the bread because I need to cut some inches off my girth. Sad. While I am in line for the sweet rolls, Ruth heads for the Six Rivers farm booth. Thus time of the season, they have heads of lettuce bigger than bowling balls, and radishes the size of a fist. The strawberries are in right now. Last week Ruth bought several freshly picked quarts from the ladies on our road and turned them into jam before they knew they had been picked. Just a delicious as last year’s batch.

Back at the market, maybe six or seven vendors selling meat or poultry products, almost all raised organically. We are not eating much meat these days, so I limit my purchases to sausage meat. Delicious. One local coffee roaster, Moses Dyer, offers coffee (donations requested), and about eight or nine freshly roasted varieties. We love their StormKing, a delectable dark roast. Two or three more cheeses makers, the de rigueur gluten-free bakery, fresh cut mushroom, Afghani breads and concoctions, llama wools, knife-sharpening, cut flowers, and much more, just about everything you need.

All of this so far in on the inside of the vendor booths, but what’s going on outside in the center of the rectangular array is just as marvelous. People and their dogs (leashed and well-behaved, mostly) streaming along the line of booths. Long-lines in front of the most popular handful of booth, not at all minding the wait to get inside. Little kids sitting on the benches, listening to the singers that enliven the experience. We are early birds, but even so, almost always run into friends. With our tote bags filled we head back to the car, neatly parked under the direction of the same flaggers that wave us to the ever-disappearing spots on our arrival. The order of the parking area contrasts with the beautiful, moving, chaotic scene inside.

Now, stop for a moment and picture shopping at Hannaford (our local chain) or any supermarket. My concerns in this post are not about what’s on the shelves. Supermarkets and the factory foods they offer are inevitable consequences of our modern, industrialized economy. Some other time I will write about the serious negative effects of this mode of production on the health of both the environment and our bodies. Today, the focus in on the shopping scene itself, contrasting the lively community at the farmer’s market and the still, eerily mostly empty aisles of the supermarket. Ever more ways to enter, shop, and leave without encountering a single other human being. The presence of the producers at the farmer’s market and all the others brushing by brings a consciousness of being, of actually being a part of a community, of the reality of food raised with care, of being alive.

Why is it important to write about such seemingly mundane, not-out-of-the-ordinary experiences? Because they are disappearing. As the major institutions in which we pass the times of our lives get bigger and bigger, the commodification of experience grows with them. Amazon, Google, Facebook, Wal-Mart, cancerous-like corporations, growing without bounds as the limits to corporate growth are torn away day by day. And for what? It is not clear that anything is improved. What’s a little more efficiency worth its the price is a less connected world.

What’s happening today is the opposite of conservatism. Don’t get conned by the false labels that are attached to just about all-political activities in the US. Conservatism is all about conserving, not about allowing unbridled change. Edmund Burke would be ashamed at how his ideas have been corrupted today. His notion of conservatism was based largely on holding together the ties that bound English society together and provided its stability. The farmer’s market would be his idea of an ideal world, not Hannaford.